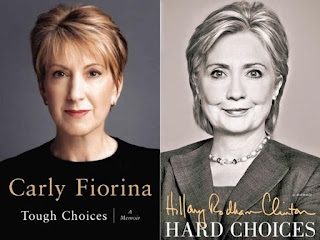 Although I pretty much gave up hope in politics and especially our two-party monopoly system by college age, I have to admit, I've been a little excited about the upcoming 2016 elections. For the first time ever, we have viable female candidates in the major political parties, not only for vice-president (which, btw, has only happened twice), but for actual president. And thank goodness, we have one on both the Republican and Democratic sides, because I could never bring myself to vote for Hillary (who pretty much represents everything I don't like and don't trust about politics) despite my fervent support of female empowerment.

On the other hand, I've been very impressed by Carly Fiorina. She's tough, sharp, and on target. She's clawed her way to the top, mostly through her excellent speech and debate skills. She's already conquered the corporate world, despite the so-called "glass ceilings" for women, and now she's ready to take on running our country. And I like that she while she has proven herself a competent leader, she has not spent her life mired in that political system I dislike so much. If indeed Hillary does win the Democratic nomination, I strongly believe that Carly would be the opponent with the greatest chance of beating her.

I confessed recently on facebook, that despite the fact that I disagree with many of Obama's political stances, as someone who has long been interested in African-American history and issues, I smile every time I see him and his lovely wife and daughters representing our country as the first family. (And Michelle totally rocked on So You Think You Can Dance!) I'm glad that the obstacles to race and sex are being overcome in our country.

It makes me hopeful that someday we will hear the words "Mrs. President" or perhaps "Madam President" if she prefers.

Here's a funny little video that shows the types of obstacles Carly Fiorina has overcome. Hopefully we're getting beyond some of this thinking, but no doubt, Carly has been a valiant woman to get to the place she is now.