Did you know that in addition to being an author with Bethany House Publishers, I also serve as an editor for WhiteFire Publishing? WhiteFire is a small, new press with a vision to release books for the upcoming generations. They focus on high quality, cross-genre novels and books that are sometimes hard to market, as well as cutting edge inspirational nonfiction. Their motto is, Where Spirit Meets Page, and I truly believe that each book they publish has the ability to touch readers on a very deep level. 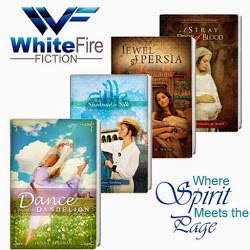 Years ago my writing career began with Dance of the Dandelion, a medieval novel which was deemed good but unmarketable by many of the large Christian publishing houses. WhiteFire took a chance on me anyway. And I knew I wanted to be a part of their mission. I volunteered to help out in any way they needed me and ended up representing them as an acquisitions editor at conferences. Since then, my role has evolved into a paid, part-time member of the editorial team. I acquire, serve as a member of our publishing committee, content edit, and sometimes even line edit.

Getting involved with WhiteFire was one of the best decisions I've ever made because I learned to think like a publisher. Of the hundreds of novel ideas rolling around in my head, I can now pinpoint the ones that publishers will want and write a stellar proposal to catch their attention. I can content and line edit my own novels to the point where they will stand above the crowd. And I know how to communicate with editors in the right way.

My writing and editing support and inform one another. I'm a better editor for being a writer, and I'm a better writer for being an editor. It's a delicious cycle that I'm very happy to be a part of.

For more about WhiteFire Publishing please visit their website here.
Posted by Dina Sleiman at 9:41 AM 4 comments:

Email ThisBlogThis!Share to TwitterShare to FacebookShare to Pinterest
Labels: Dina's Life and Writing

The Woman of Valor

I learned something really cool last week! You might or might not be familiar with a poem from Proverbs 31 about a "Virtuous Woman." In church circles, this chapter is often used as an example of  perfect Biblical womanhood. Sometimes, it even becomes a checklist to bang over women's heads, which can lead to a lot of guilt, shame, and inferiority. But I think this poem was meant to do the opposite. A woman clothed with strength and dignity... A woman who laughs without fear of the future...

Years ago I figured out a few things about this passage. 1) The woman was rich and had servants, so not many of us these days can hope to accomplish as much as she did. 2) The woman clearly does not have small children, so those struggling through that exciting yet exhausting stage of life need not expect to live up to her esteemed standards. 3) She was a business woman who had her own mind and made her own decisions, so in many ways she is an example for a more liberated woman than some Christian denominations advocate.

But last week I learned the coolest thing ever. I was reading a book examining Biblical womanhood, and the author examined a variety of Biblical traditions including Jewish, Catholic, Amish, etc... Jews do not translate the Hebrew term "eshet chayil" in Proverbs 31 as "virtuous woman," they translate it as "woman of valor." I love that! Don't you? And they understand that it is a poem in praise of the type of woman who should be honored, not a to-do list. Jewish husband's quote this poem in praise of their wives, they don't use it to show them how they're falling short. Jewish women use the term eshet chayil to celebrate each other's accomplishments.

The author decided to pick up that habit, and I think I will too. As I googled "woman of valor" to find an image for this post, I realized that this idea is more popular and wide-spread than I had realized. And, of course, eshet chayil, goes perfectly with my Valiant Hearts series. So I encourage you all to be strong and courageous women, worthy of the title eshet chayil, and to honor other valorous women in your lives as well.