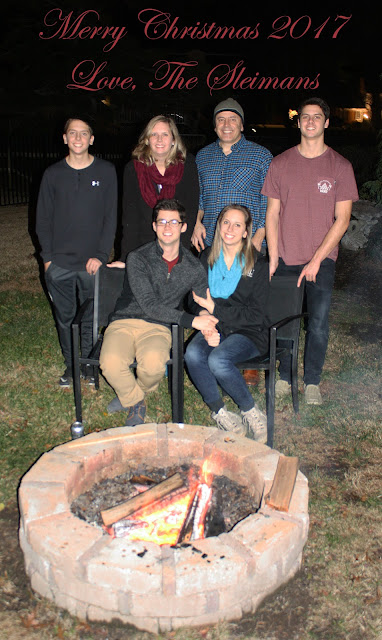 Merry Christmas from our hearth to yours!

The Sleimans have had an exciting and busy year, starting with Christi Sleiman's college graduation at the top of her mechanical engineering program in May, followed in July by her engagement to Adam Giedd. She first met Adam when they were co-mission leaders on a trip to Israel, and they grew even closer as they worked as brother/sister dorm head resident advisors. They will be married in January! This year Adam Giedd is finishing up his Master's degree in education at Oral Roberts University in Tulsa while Christi works as a hall director for the school. Next year, they're excited to see where God will lead them, very possibly to an engineering job for Christi.

Jonny Sleiman is a junior marketing major and president of his Enactus business club at Oral Roberts University. He also works part-time in a marketing position for the school. Despite a football induced broken finger requiring surgery, he's having a great year and looking forward to a promising future in the business field.

Adam Sleiman (not to be confused with Adam Giedd above) has been focusing on soccer and piano this year. Over the summer he traveled to Guatemala on a missionary trip with Adventures in Missions. He's still learning Arabic and Spanish at the Global Studies program at Tallwood High School.

Dina Sleiman released another novel this year, Dare from Deep Within, which follows the characters from her previous Dance from Deep Within as they help a young Muslim woman escape her abusive family. Dina also continues to work as a writer for Operation Blessing and an administrator at Acts 2 Church.

Dani Sleiman has also experienced some big changes this year. Recently, he officially resigned from the Christian Broadcasting Network, where he happily served for over twenty years, and he is stepping out as a freelance contractor in the computer field. His big project is a media related app that he hopes to see launched fully some time soon.

Blessings to you and yours. We hope you have a great year filled with love, peace, and joy.

Email ThisBlogThis!Share to TwitterShare to FacebookShare to Pinterest
Labels: Dina's Life and Writing